What Does Having ADHD Cost? 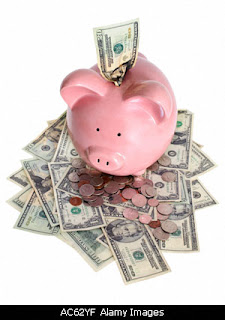 Have you ever stopped to think what your son/daughter's ADHD actually costs? The thought had really never crossed my mind until I read this article. After I sat down and added up the doctor visits and medications, I discovered that our son's ADHD costs us approximately $800 a year. And, that is with insurance. This figure does not take into account the other medical bills that are incurred due to his ADHD. According to a study published in the Journal of the American Medical Association (JAMA), "...ADHD children had higher rates of accidents and medical illnesses than children without ADHD." This would increase the annual cost by adding emergency room visits (due to injury) and additional doctors office visits. Jeannine Virtuem, a freelance writer, reports that the annual cost for ADHD is $77 billion. Isn't that an astounding figure?

The cost of medications used to treat ADHD has increased as well. According to the Wellmark Report this cost has nearly doubled since 1999. This same report supplies a daily cost comparison chart of six commonly used ADHD medications:

Consumer Reports provides an even more comprehensive cost comparison chart of ADHD medications . Their list provides the generic and brand names along with the average monthly cost. Also, this list is current as of November 2006. Therefore, Vyvanse is not included as it was released after the list was compiled.

If you do not have medical insurance or a prescription card, these expenses can quickly put a large dent in your monthly budget. KeepKidsHealthy.com has an article that offers tips on how to save money on prescriptions. I highly recommend you check it out before paying for next months prescription out of your pocket. It is appropriately entitled Saving Money on Prescriptions. I would also like to offer a personal tip on this subject. If your lack of insurance is temporary, due to a job change for instance, I encourage you to speak with your child's prescribing physician. Explain the circumstances and ask for a one, two or even three month supply of your child's medication. Often times physicians have a large supply available to them courtesy of drug reps and will gladly give them to you during your transition period. I have actually done this and it saved us a bundle until our insurance took effect.

Although there is virtually nothing we can do about the cost of ADHD medication, we can discuss the financial aspect of treatment with our child's physician. He/she should be able to take your financial situation into account when prescribing your child's medication. Since the most expensive drug is not necessarily the most effective, why not ask for you child to be put on a more inexpensive yet equally effective medication? It never hurts to ask, right?