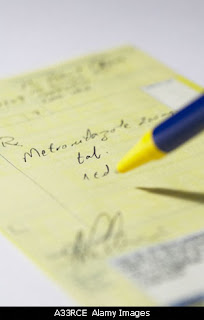 The Drug Enforcement Administration (DEA) is finalizing a Notice of Proposed Rulemaking published on September 6, 2006 (71 FR 52724). In that document, DEA proposed to amend its regulations to allow practitioners to provide individual patients with multiple prescriptions, to be filled sequentially, for the same schedule II controlled substance, with such multiple prescriptions having the combined effect of allowing a patient to receive over time up to a 90- day supply of that controlled substance. This rule is effective December 19, 2007. --US Drug Enforcement Agency

To translate..... Beginning December 19, 2007, the US Department of Justice Drug Enforcement Administration allows doctors to prescribe 90 days of Schedule II controlled medicines at one time. This covers both forms of stimulants used for ADHD: the methylphenidate medicines such as Concerta, Daytrana, Focalin, Metadate, and Ritalin, and the amphetamine medicines such as Adderall, Dexedrine, and Vyvanse. During the past year's public comment period, much of the controversy over this rule change involved abusable pain medicines, while the consensus viewed better availability of stimulants to ADHD patients as a significant benefit. In addition to relief from the logistics of obtaining a new written prescription each month, this 90 day time period between office visits is more consistent with current medical care guidelines for stable patients. It also allows doctors flexibility to prescribe medicine amounts matching coverage by payment programs. --myADHD.com News

What great news! No more visiting the doctor's office each month just to pick up a prescription.