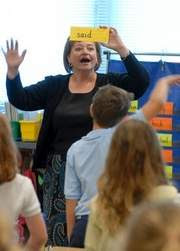 They ate with chopsticks in Japan, made piñatas and dove into chips and salsa in
Mexico and threw boomerangs in Australia.

And on Thursday and Friday, Debbie Suhrie's first-grade students ate fruit kabobs as they kicked back at their desks and listened to steel drum music in their Jamaican-themed classroom.


Every six weeks, Suhrie's students pack their bags, prepare their passports and head out for a cultural classroom adventure.

Suhrie, 55, believes in the old saying, "If you can reach them, you can teach them." So she taps into her creativity to figure out how to reach every one of her students.

Now that's what creative teaching is all about! This teacher was nominated for, awarded and certainly earned the Golden Apple Award.

Wouldn't it be amazing if all, or at least many more, teachers went above and beyond the call of duty to teach our children. Think of the possibilities. Countless students could be reached with creative teaching.

Kudos to you, Mrs. Suhrie. You wouldn't want to relocate to Virginia any time soon would you?

You can read the article in its entirety via NewsPress.com.
Shared by Shane H. at 7:38 AM