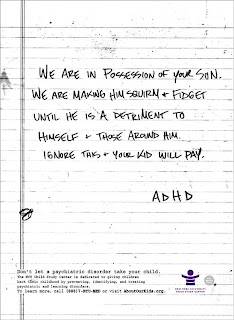 In December 2007 an ad agency created a series of advertisements for the Child Study Center at New York University. After only two weeks the ads were pulled due to parental protest. The original goal was to increase awareness of children's mental and neurological disorders.

Advocates for children with autism and for other special-needs children said the ads reinforced negative stereotypes.

What are your thoughts on this? Do you think ads like these would promote stereotypical notions of ADHD and other disorders? Or do you think this would have been a novel approach to promote awareness?
You can read the full story on The New York Times website.
Shared by Shane H. at 7:45 AM