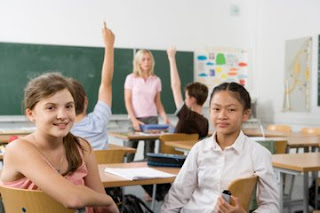 In last Sunday's Parade Magazine I read an article entitled The End of Grade Levels? and found it quite intriguing. The theory is based on the fact that children learn in different ways and at various rates. What takes one student one hour to learn may take another student a full day to grasp.

This has already been implemented in the Chugach school district in Alaska. In just five years, that district's achievement scores have gone from being the lowest in the state to among the highest. Schools nationwide are beginning to give this new approach a try.

I can definitely see how this approach would benefit my ADHD/LD son. This is the teaching model one school we previously considered for our son used. Although we decided against placing our son in that school, it had nothing to do with their lack of grade levels.

I think my son would excel in an environment that accommodated his learning disabilities. If he were surrounded by other students, regardless of their age, who were having difficulties as well, he would be more comfortable and relaxed. He wouldn't feel like the "dumb one" when he didn't understand a concept that the rest of the class mastered easily. Everyones learning curve would be relatively the same, reducing his anxiety.

I would love to see every school district in the U.S. give parents and students the option... attend a school with grade levels or without. I know that will never happen, but I can dream.

What are your thoughts on this subject? Do you think your child would benefit from this type of classroom environment? Do you see any negatives?

By the way, Parade Magazine has created a poll to see how m any of their readers agree and disagree with the idea of not having grade levels in schools. So far their readers are in favor of it.... 79% for and 21% against.
Shared by Shane H. at 5:37 PM