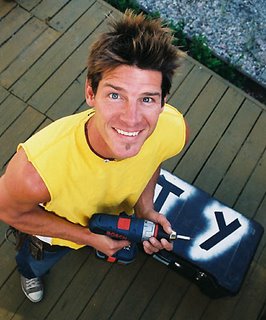 Did you know that Ty Pennington, the handy carpenter of Extreme Makeover Home Edition fame, has ADHD? He was first diagnosed in high school and is currently still taking medication for it. I think it is such a wonderful thing for celebrities with such disorders to be open and honest about them instead of trying to hide them. This is someone that I can point out to my son and say, see that guy...he has ADHD too. Actually I did just that recently while we were watching his show and my ADHD son was elated. He couldn't believe that someone as "cool" as him had ADHD too. "He's even on tv" my son said. It just made my day to see him realize that he's not abnormal and he's not the only one suffering with this disorder. He won't miss the show now. Thanks a bunch, Ty!

To read more about Ty's story and to view a short video by him, go here.
Shared by Shane H. at 9:12 PM